A recent study conducted by the University of Kentucky Department of Entomology researchers found that monarch butterflies and various bee species quickly find and use milkweeds in small urban gardens. They showed that monarchs and bees have preferences for the type and size of the plants.

“Our goal was to demonstrate to gardeners and homeowners that they can participate in meaningful pollinator conservation in their own backyard,” said Adam Baker, UK graduate student in the College of the Agriculture, Food and Environment. 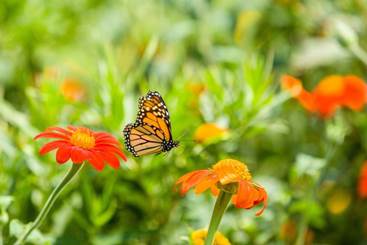 Since scientists began monitoring the eastern migratory population of monarchs in the 1990s, their numbers have declined by more than 80 percent. Monarch population decline has been attributed to the loss of milkweed host plants from the primary breeding grounds. Habitat loss due to agriculture and urbanization has also led to a decline in wild bees and other pollinators.

Baker and Daniel Potter, UK entomology professor, examined ways milkweed, which is the monarch’s only food source, can be successfully reincorporated into urban gardens. The study looked at the egg laying and feeding preferences of monarchs and visits by bees on eight milkweed species in small gardens located at The Arboretum and other areas throughout Lexington during 2016 and 2017.

“To our knowledge, this is the first study that compares monarch colonization and performance on different milkweed species in a common garden,” Potter said.

The UK researchers found monarch eggs and larvae on all eight milkweed species during both growing seasons. Monarch caterpillars were found on the plants just two weeks after the seedlings had been transplanted. All eight species also supported larval survival and development.

Monarchs were more attracted to the taller milkweed species with broad leaves, which include swamp milkweed, common milkweed, and showy milkweed. 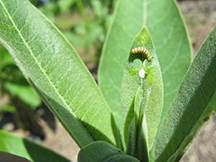 Common and showy milkweeds had the highest numbers of monarch eggs. Six of the eight milkweeds produced enough flowers to attract bees.

UK researchers also studied each milkweed species ability to be incorporated into a small garden as some plants tend to spread from their original boundaries. Species that tend to stay where they are planted include swamp milkweed, butterflyweed, and spider milkweed. These would work well when space is limited. Species including common milkweed, showy milkweed, narrowleaf milkweed and whorled milkweed tend to spread and are better suited for larger plantings.

Baker and Potter’s study was recently published in The Journal of Insect Conservation and is available online at https://rdcu.be/T5oD.